If fleas have become a chronic problem in your home or business, call Dave’s Quality Pest Control to remove flea invasions that can endanger your pets, home or business.

Sometimes it’s obvious that fleas have entered your household. When you see the tiny critters hopping up and down on your pet, pet bedding or carpeting or evidence or see evidence of droppings, it’s clear you need to call a professional.

Professional treatment for your cat, dog, furniture, carpets and general living area in your home will get rid of fleas as well as help with long term prevention. With over 14 years of experience in assessment and control of fleas, we are your solution in Kawartha Lakes, Peterborough, Northumberland and surrounding communities.

Flea Infestation Home Remedies Will Not Take Care of Problem

There are many home remedies for fleas, including sprays and foggers but they will not address the underlying cause or provide a permanent solution. For flea control  in Peterborough and the Kawarthas, call us today. The inspection fee disappears from your bottom line when you book with us. We return the fee to you and deal with your flea infestation problem promptly and permanently.

Not Sure Where The Bites Are Coming From?

We offer a variety of insect control services in Ontario, so please feel free to contact our team for a professional opinion.

Like most household pests, the first evidence you will see of fleas are often droppings. Unchecked, these first signs, including bites on your pet, as well as small specks on bedding or carpets, can escalate quickly.

Most flea outbreaks are caused by dogs and cats but can leap to humans and cause itching and swelling. In rare cases, fleas can enter your home even if you do not own a pet and can wreak havoc. Take a look at your pet’s bedding to look for evidence of dropping or small specks which could be eggs from female fleas who sometimes lay twenty-five or more at once.

It is a common fallacy that all cats and dogs have fleas. Most of these animals can be kept free of fleas if basic hygienic practices are followed. Fleas are a common pest of many types of animals, including humans.

A female flea can lay 25 eggs per day, producing approximately 800 eggs in its life. Although fleas usually feed several times a day on animals, they can survive several weeks without a meal. Adult fleas usually leave the host after feeding; however, flea eggs, larvae or pupae may be found on pets.

The peak season for flea infestations outdoors in most parts of Canada is from early August to early October. In excessively dry, hot summers flea populations tend to decrease; fleas are unable to retain moisture and they dehydrate and die.

Only female fleas bite. The bites cause the formation of a small, hard, red, itchy spot on the skin. When the flea pierces the skin with its mouth-parts, it injects a salivary secretion to prevent its host's blood from clotting. The itchiness is due to a reaction of the body's immune system to substances in the salivary secretions. Reactions are specific to each individual; some may be more affected than others. To relieve the itchiness, apply ice cubes or calamine lotion to the bite.

Fleas have four stages of development: egg, larval, pupal and adult. The life cycle varies depending on the flea species, temperature, humidity and the availability of food. The optimum development period from egg to adult is two to three weeks; however, when conditions do not favor rapid development the cycle may take several months.

After each blood meal, female fleas lay four to eight smooth, round, light-coloured, sticky eggs. Eggs laid on a host can easily fall or be brushed off. High concentrations are usually present in pet bedding, boxes or kennels.

Eggs hatch into very small, hairy, worm-like larvae that are whitish with brownish heads. They are about 1.5 mm long and may grow to five mm. During this time they avoid light and are sensitive to changes in humidity and temperature. Flea larvae feed on organic debris, their own cast skins and on dried blood present in the excrement of adult fleas. They can survive for up to 200 days in unfavourable conditions and can travel distances of up to 30 cm per minute. They will coil around the nearest object, often carpet fibres, in order to avoid the suction of a vacuum.

In the third stage of development, flea larvae spin silken cocoons covered with particles of dust, fibres, sand and organic debris. Within this cocoon, they metamorphose in the shape of adult fleas. They are white in colour at the onset and change to brown before emerging.

Adult fleas are small, dark brown or reddish brown insects ranging in length from 1 to 4 mm. Their bodies are flattened from side to side allowing them to move easily through hair or fur. Although they are wingless, their stout hind legs are well adapted for jumping. Fleas can jump a maximum distance of 20 cm vertically and 41 cm horizontally. Their comb-like, spiny legs make it difficult to detach fleas from a host. Adult fleas may remain in the pupal chamber for several months until favourable conditions, such as increased temperature and carbon dioxide concentrations, favour their emergence. Vibrations indicating the presence of a host also stimulate their emergence. This explains why fleas in unoccupied homes become active as soon as humans or pets re-enter.

Just wanted to write to you and let you know how happy I am with the pest control services you have provided to us over the years.

I always know Dave will answer the phone or return my urgent messages and make sure I am happy, even though I am known to be a tough customer. So thanks for helping keep my sanity over the years and also keeping your promises too.

Spring is coming here in Ontario and that means cluster flies. If you already have cluster flies, here is some simple advice from the pros. 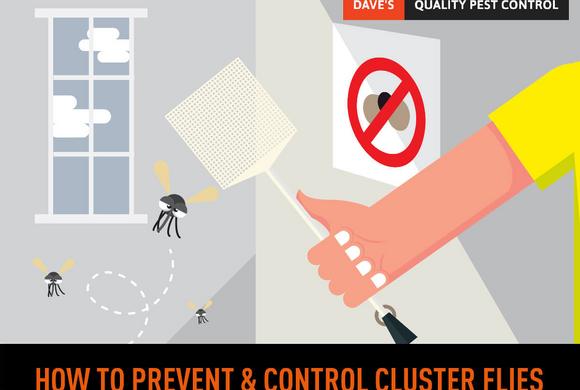