We have thirty-six years of pest removal and control experience and can quickly get rid of earwigs and we're proud to offer our services in Peterborough, Port Hope, Cobourg, Lindsay, and Kawartha Lakes.

At Dave’s Quality Pest Control, we know the damage that earwigs and other pests can cause to your home, business and personal health. Although they won’t literally lay eggs inside your ear, evidence of earwigs should not be ignored!

If you live in the Kawarthas or the surrounding region, call Dave’s to get rid of this nuisance before it leads to greater trouble.

Earwig Home Remedies Do Not Work

Although there are many oversimplified remedies suggested online to properly deal with earwigs, they don’t work!. Call Dave’s to put an end to this problem before it gains traction and before they lay their eggs.

If you detect earwigs, or any other pest beginning to take hold, call Dave’s Quality Pest Control immediately for a quote before your situation gets more serious.

In medieval England, the term “earwig” was coined when people thought that these pests sought out the human ear to nestle in. Around the same time, the French nicknamed them “ear piercers” due to their prickly appearing appendages. They are sometimes referred to as Pincher bugs today.
Although they can be found in almost any climate, earwigs are drawn to warm, humid places. These nocturnal and fast-moving creatures can scatter quickly and hide away during the day time hours. Wood that is old and moist and other dark damp places are common places to find earwigs. Musty basements and wood piles are also natural habitats. The pincers on Earwigs are important identifiers of gender. The males have longer and curved appendages to defend themselves or attack prey. During the day, earwigs like to hide in cool, dark, moist places. They crawl under stones, into garden rubbish, in tubular legs of garden furniture, wooden fences, hollow aluminium doors, and in other cracks and crevices. Earwigs come out of hiding at dusk to begin foraging. While decaying organic matter forms the largest part of their diet, they also feed on the tender shoots, leaves and blossoms of such flowering plants as marigolds, roses, carnations, clematis, dahlias, zinnias, gladioli, chrysanthemums and asters. They can chew on garden vegetables such as lettuce, celery, potatoes, beans, carrots, and sweet corn. Earwigs are also carnivorous, eating other small insects and sometimes even each other. In search of food and shelter, they crawl over the ground, climb houses, fences and trees, and usually begin to infiltrate homes in June or July. What is particularly objectionable is to find these insects among foodstuffs, clothes and occasionally between bed covers.

Earwigs are often beneficial in habit, acting as scavengers of decaying matter and predators of insect larvae, slug eggs, aphids, and other garden pests. Native of Europe, the European earwig was first sighted in what is now Canada at Carbonear, Newfoundland, as noted in a report covering the period 1827-1835. Its presence was also recorded at Newport, Rhode Island in 1911. Having few North American predators, it moved west to California and then rapidly made its way north. In many areas of eastern Canada and British Columbia it has become a garden pest. The earwig can damage leaves, fruits, vegetables and flowers, particularly when plants are young. When earwigs are numerous, they may invade homes but will not breed indoors.

The length of the adult earwig is approximately 1.5 to 2.0 cm long. It is elongated and flattened, with a tough, shiny, reddish-brown exoskeleton and antennae about half as long as the body. This insect is distinguished by prominent pincers, or forceps, at the end of its body. The male has a large, curved pair, whereas the females are smaller and nearly straight. The earwig uses these fierce looking appendages during courtship, and in defence to grasp attacking insects. Adult earwigs have small, leathery wings; to fly, they must take off from a high place as their wings are not strong enough to lift them from the ground.

Earwigs live only one year. They spend the winter hiding just below the soil surface, usually close to house foundations. Warm weather brings them out of hibernation. In the spring, each female lays as many as 60 round, pearly white eggs in a nest in the top 5 cm of the soil. The mother tends the young in the nest for the first two weeks. When they are about 6 mm long, the young leave the nest in search of food. An earwig will shed its skin, or moult, four times before reaching adulthood in about 70 days. The young are similar in general appearance to the adult, but smaller. About one fifth of the females lay a second batch of eggs in June. The young from these appear in July and August.

Bats and Raccoons Dealt With

Can't say enough about this company.

Bats and raccoons were dealt with and the employees are very knowledgeable.

Thanks Ashley,
Tim and Steve

Earwigs, with their menacing-looking pincers are one of the most frightening insects to find in your home. Many myths exist about earwigs. 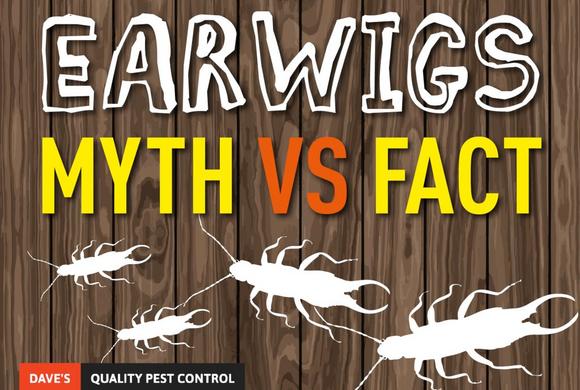